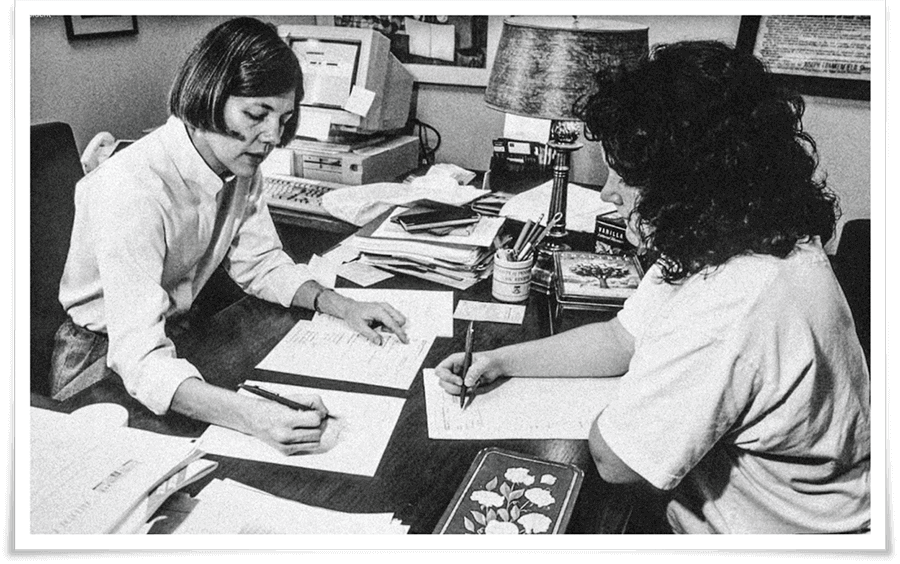 Elizabeth Warren used to be a Republican, until her research into personal bankruptcy revealed that the problem wasn’t “deadbeat” debtors – but personal misfortune and a predatory loan industry. 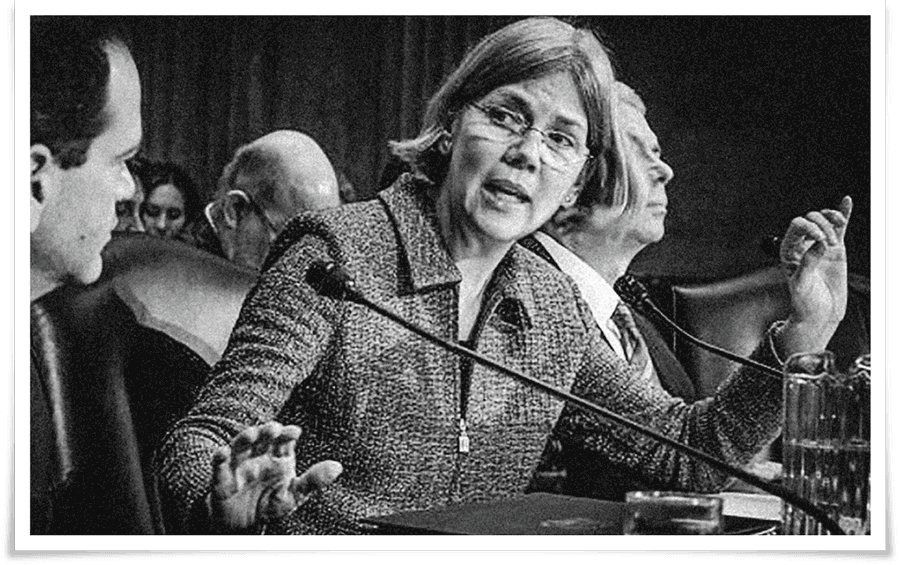 Still just a professor, she proposed a new federal agency, the Consumer Financial Protection Bureau, that would protect consumers from deceptive behavior by the financial industry. And she convinced Congress to sign it into law. 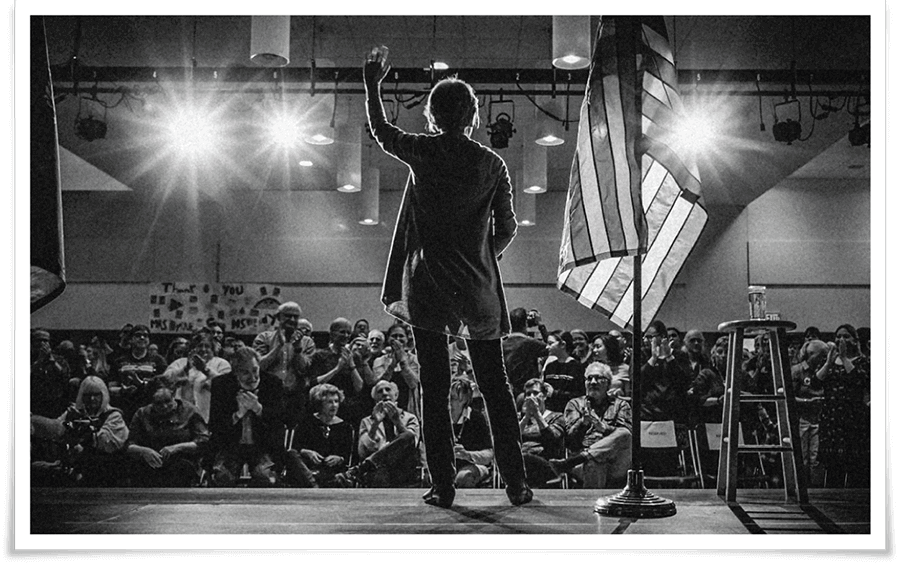 Warren never wanted to get into politics, but at 62 ran for US Senate, her first elected office – after witnessing the stranglehold of powerful industries over government, and feeling called to fight back.

PERSISTED
THE LIFE OF ELIZABETH WARREN

‘Your mother was at home when they took the station wagon,’ he said, his voice low. ‘And then they said they were going to take the house. She cried every night.’
Elizabeth Warren
This Fight Is Our Fight

Warren saw her family come to the brink of financial disaster

At 12 years old, Warren learned about the fear and anxiety that comes from financial insecurity. Her father, the sole breadwinner at the time, had a heart attack. Medical bills piled up. The car was repossessed.

The family home was an inch away from being lost when Warren’s mom found a minimum wage job answering the phone at Sears. With wages going so much farther in 1961 than today, this job was able to pull the family back from the financial edge.

I’m a janitor’s daughter who became a public school teacher, a professor, and a United States Senator...
But I’m worried. Worried that my story is locked in the past. Worried that opportunity is slipping away for people who work hard and play by the rules.
Elizabeth Warren
Democratic National Convention, 2016

I made it to the US Senate and a big part of the reason for that is that I went to a commuter college that cost $50 a semester. I got a good education because I grew up in an America that said, ‘Our job is to invest in our kids and to help them build a future’ and that's what fundamentally changed.
Elizabeth Warren
Jon Stewart Show, 4.22.2014

Warren dreamed of being a teacher since childhood, but her family couldn't afford to send her to college – and she was encouraged by her mother to focus on marriage, not career. But she persisted, using her considerable talents on the debate team to earn a full scholarship to George Washington University.

Then, before her junior year, her high school sweetheart dropped back into her life, and over a cheeseburger, proposed to her. They moved to Houston where she got a job answering phones. But she couldn't forget her dream of teaching and soon discovered that the University of Houston, in an era when government invested heavily in education, would only cost $50 a semester – so she went back to college.

She eventually went to law school which was also affordable at the time, at only $460 per semester.

Part of me still wanted to buy the deadbeat story because it was so comforting, but somewhere along the way, while collecting all those bits of data, I came to know who those people were.
Elizabeth Warren
A Fighting Chance

As a law professor teaching bankruptcy law, Warren assumed that those who declared bankruptcy were ‘deadbeats’ – people unwilling to take responsibility for their debts. But realizing there was no data to back this up, she undertook groundbreaking research that involved looking at the experiences of a quarter million debtors. The results were a shock – she discovered that most people experienced bankruptcy due to a combination of personal crises (loss of job, medical emergency, divorce) and predatory practices on the part of the loan industry. This experience changed her political outlook - she began her transition from conservative to fiercely progressive.

In 1989, Warren co-authored an influential book detailing her findings.

The banking industry had lost for a second time, but it came back once again, bringing even more money and more lobbyists. It was like fighting some kind of mythical creature–cut off one head and two grow back.
Elizabeth Warren
A Fighting Chance

Warren takes on the financial industry in the “Bankruptcy Wars”

In 1995, at the urging of the financial industry, Congress was considering tightening bankruptcy rules to make it harder for people to erase their debts. Armed with more than a decade of research, Warren knew that the banks had deliberately targeted people with astronomical interest rates and unsustainable levels of debt. Now they wanted to block the door to the bankruptcy exit. Hoping to work from the inside to protect consumers, Warren made the jump from professor to political advocate, and accepted an appointment as senior advisor to the National Bankruptcy Review Commission.

Over the next 10 years, Warren immersed herself in the fight to hold off the banks. She wrote another book, lobbied Senators, did more research, appeared on Dr. Phil – and ultimately convinced the Clinton administration not to sign the bill.

But after 10 years of “Bankruptcy Wars,” the banks passed their bill with the help of most of the Republicans and half of the Democrats in Congress.

I still didn't have a badge or a set of handcuffs, and I was still nervous about going on television... but I learned... that insiders don't appreciate questions from outsiders, including pesky professors who don't know the unwritten rules of Washington.
Elizabeth Warren
A Fighting Chance

During the 2008 financial crisis, Warren was tapped to serve on the panel providing oversight of the Wall Street bailout funds.

The oversight panel had little official power and was stonewalled relentlessly by the Treasury Department. Nevertheless, Warren persisted. Her team identified a $78 billion shortfall caused by sweetheart deals given to the banks. They publicized the fact that homeowners, small businesses and small banks were receiving minimal assistance. Their reports put a spotlight on these abuses and Warren went on television to publicize the findings.

One of the reports pressured the Treasury to back away from yet another sweetheart deal for the banks, saving $8.6 billion for taxpayers.

On the bank bailout

Warren Calls Out Giveaways to the Banks

By the usual rules of Washington, the powerful banks should have beaten the people so easily and so thoroughly that the consumer agency would be nothing more than a tiny grease spot on the trouser cuff of a $1,000-an-hour lobbyist.
Elizabeth Warren
A Fighting Chance

In Warren's research, she came across people who were tricked by financial institutions – ballooning interest rates, hidden fees, and other tricks sometimes resulted in financial disaster for those involved. She thought back to earlier eras, when consumer products had become regulated. No longer could toasters explode or could toys contain arsenic.

What if the US had an agency to regulate financial products like toasters, so they wouldn't explode and harm the buyers? She penned an essay laying out the idea in 2007, and after the financial crisis, convinced the US Congress and the Administration to include it in the financial reform bill. Armies of bank lobbyists, who considered the Consumer Financial Protection Bureau a major threat, fought against it tooth and nail.

But Warren and her team persisted and prevailed. In 2010, President Obama appointed Warren to lead the launch of the new Consumer Financial Protection Bureau.

The annals of academia are stuffed with provocative proposals. Most die in the library. A little over four years after she first dreamed it up, Warren’s has become a reality. Last summer, President Obama signed the Dodd-Frank Wall Street Reform and Consumer Protection Act, a package of financial reforms meant to prevent another economic meltdown. One of the bill’s pillars is Warren’s watchdog agency, now called the Consumer Financial Protection Bureau.

I really didn't want to run. I'd had enough of Washington. I'd never yearned for a life in politics. I missed teaching; I missed my research. I missed hiking with Bruce and time with our grandchildren... And yet, there was so much at stake in this election.
Elizabeth Warren
A Fighting Chance

Due to her effective work – on the Consumer Financial Protection Bureau and overseeing the bank bailout – President Obama suggested to Warren that she run for the Massachusetts Senate seat, then held by Scott Brown, a popular Republican.

She was a reluctant candidate, who at 62 years old had never run for elected office. But knowing that her work, and so many other important issues were at stake, she decided she wouldn't be able to live with herself if she didn't step into the ring.

She waged a campaign powered by the grassroots – volunteers knocked on 300,000 doors and made 700,000 phone calls. 80% of her contributions were for $50 or less. Voter turnout was the highest in history for a Massachusetts election, with 73% of registered voters participating.

Even against a popular incumbent, Warren prevailed with 54% of the vote.

Warren turns the spotlight on the health insurance giant, Anthem, who threatened to pull out of the Affordable Care Act marketplace.

Warren questions the administration on the child separation policy.

She was warned. She was given an explanation. Nevertheless, she persisted.
Senator Mitch McConnell
Senate floor, 2017

In an extraordinary incident, Senate Republicans voted to silence Warren in the debate over Jeff Sessions' appointment as Attorney General. Warren was reading a letter that Coretta Scott King had written in 1986, which stated “Mr. Sessions has used the awesome power of his office to chill the free exercise of the vote by black citizens.”

The Republicans claimed that because Sessions was also a Senator at the time, Warren was violating a Senate rule which prohibits ascribing “to other senators any conduct or motive unworthy or unbecoming a senator.” Senator Warren replied that she was “surprised that the words of Coretta Scott King are not suitable for debate in the United States Senate,” but the Republicans voted unanimously to prevent her from speaking further.

It won’t be enough to just undo the terrible acts of this administration. We can’t afford to just tinker around the edges — a tax credit here, a regulation there. Our fight is for big, structural change.
Elizabeth Warren
Presidential campaign announcement speech

Warren declares her candidacy for President

The decades Warren spent fighting the financial industry taught her a critical lesson – that decisions in Washington were usually made to benefit the wealthy and well-connected, not the public. In order to make real and lasting progress, Warren believes it's necessary to change the way decisions themselves are made – creating rules that end the incentives for corruption, rather than fighting perpetual uphill battles against a rigged system. As President, anti-corruption reform is her first order of business, which she believes will clear the path for legislation relating to climate, inequality and more.

She's got a plan for that